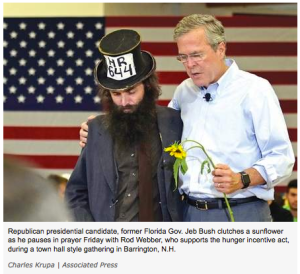 I have been on the road now for a little over a year, (including short breaks), giving out flowers to strangers and most recently, politicians. It has been paid for out of pocket, and doing so has cost me several thousand dollars. I don’t mind. I am happy to do so, because I think it has made many people happy. Many thousands of people watch my videos on Vine every day– (and to a lesser degree, YouTube).

My recent travels have brought me from the east coast to the west coast, to the east, to Iowa, back to New Hampshire, crisscrossing 45 states since 2013. During my travels I have met governors, congressmen, senators, political activists, students and people of all walks of life.

I have prayed for peace with Gov. Jeb Bush and Senator Lindsey Graham, and I have ministered with pastors and other religious workers in the street.

I try to bring a sense of humor to my work– creating inspirational sayings in my videos– but also a sense of humor, playing different characters to entertain and brighten people’s day. To the countless people who message me, (many of them young people in need of serious advice), I answer all I can. (Though some days, I admit I fall short of being able to keep up and still maintain my busy schedule).

Much to my surprise, my latest adventures have made national headlines in papers like The Washington Post, and The Huffington Post— and on CNN, CBS, and political shows like The Young Turks-– and many others. My recent talk with Chris Christie even resulted in a comedic exchange which was talked about on shows like The Nightly Show, @Midnight, The View and many others.

I hope to put together a documentary about my travels– which I have some experience with, since I have directed several feature-length indie films and documentaries, including projects with Greta Gerwig, Stan Lee (of Marvel Comics), and several other film stars you may have heard of.

But I can’t afford to do this forever. There is gas, food, cameras/ editing tools for sharing my experiences– and it adds up to a significant amount.

Today, I will try to give flowers to Hillary Clinton. (I tried once in Iowa, but the flowers were confiscated by the secret service). Right after that, I head out to give flowers to Donald Trump in Michigan. (I also tried unsuccessfully with Donald in Iowa.)

If you support what I’m doing, consider donating a small amount to keep me going a little while longer.

Here is a video explaining some of what I’ve been up to.