My America –
A film by Rod Webber and Joseph James Bellamy.
(Written by Webber & Bellamy, directed by Webber, produced by Bellamy.)

Quick Synopsis:
An erudite African American whose wife was the victim of a hate-crime reaches the end of his rope when confronted by bigot EJ Winston. My America is coming to ReelFestDC this fall! 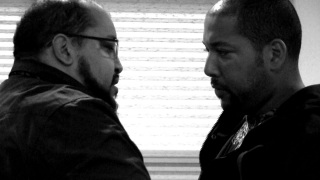 ABOUT THE FILM
There are at least two sides to every story, and it is easy to think your voice is being heard when you are part of a screaming crowd. But what happens when values and vision, ideas and ideals meet person to person, face to face, head on? How do you distill two truths down to the reality of My America?

SYNOPSIS: Maynard Brayboy (played by Joseph James Bellamy) is an erudite, educated African American who served in Iraq, but now substitute teaches at a mostly white high school. This is the worst day of his life.

On the one-year anniversary of his wife’s death, which was the result of a heinous hate-crime, he is fired from his job, and turns on the TV to see bigots at a “Tea Party” rally doing what bigots do best.

A chance meeting with EJ Winston, (played by Rod Webber) tells Brayboy all that he needs to know about this man. Brayboy recognizes him as one of the bigots at the rally. In a moment of rage, he savagely beats Winston, kidnaps him, and conducts a crash-course in American history in his basement.

But, before we can discover whether Brayboy has taught all there is about his America, he takes
Winston on a forced march into the backwoods, and it is then that we will see if he has truly reached the end of his rope.